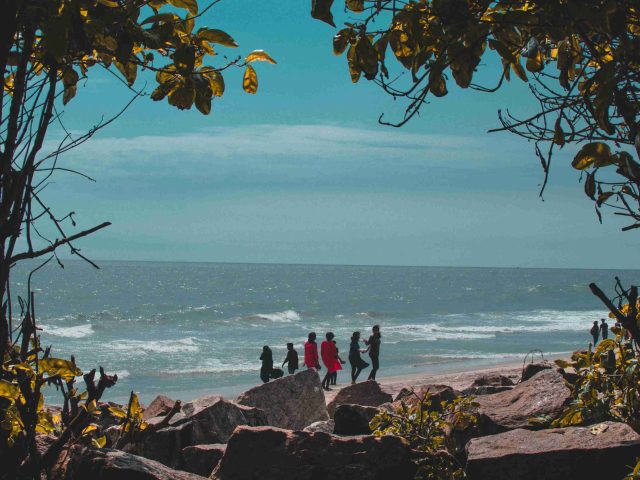 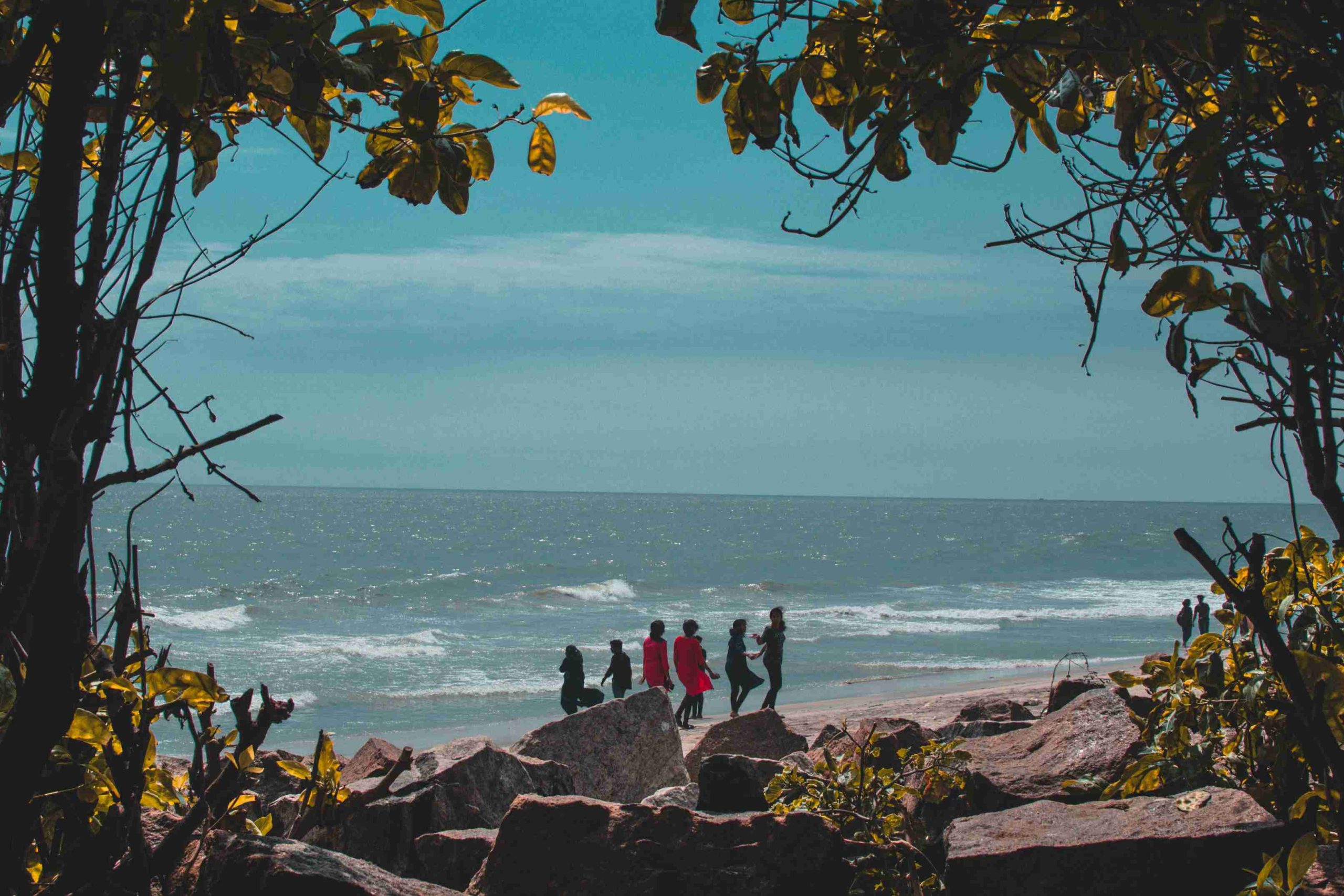 Amongst all of the Northern districts of Kerala, Kozhikode could be called as most culturally rich, as it was a port city where traders from Arabian and Chinese countries arrived. This alluring coastal town is considered a gateway to the popular hilly tourist destination, Wayanad. En route to them, one may stop over at the ever gushing Thusharigi waterfalls. Before that, tourists could be recommended to explore the street foods that are served from the ancient local streets of Kozhikode. At Beypore Beach, tourists could take a stroll on the promenade that extends to the Arabian Sea. Breathe in that fresh air at that time. Meanwhile, Kozhikode Beach is an urban bustling beach with a lot of exciting things to do, besides old sea piers on the shore. Then, within the city limits, tourists could drop into Manachira, and spend quality time at the shore of the pond or at the charming lawns. This spot is considered the heart of Calicut city. Moreover, the first-ever place where European arrived in India was Kappad Beach, in Calicut. Further, for a peaceful beach day, one may traverse Thikoddi Lighthouse Beach. If travelling to the northeastern parts of Kozhikode, tourists could make an enjoyable trip to Kakkayam Dam and the picturesque grassland surrounding them. 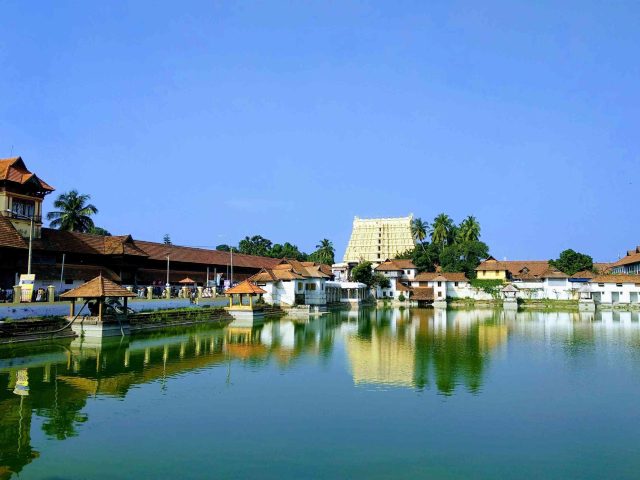 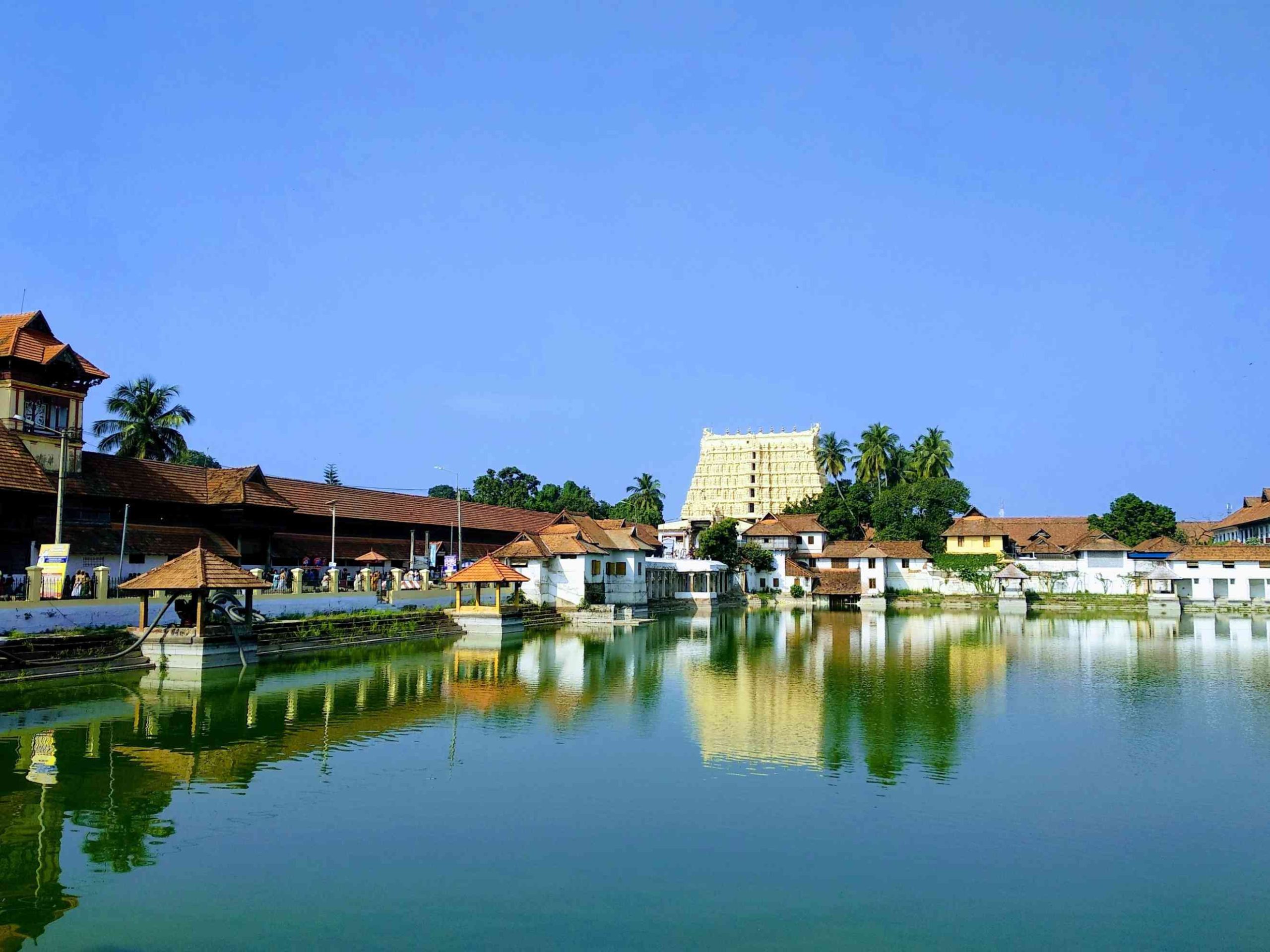 They could be more known as the capital city of Kerala. Nevertheless, there are some worthy places to be visited during your trip to Kerala. Napier Museum and the Botanical Garden around them is a must-do thing as they could be most accessible if vacationing along with the family and kids. Quite adjacent to them is situated the Kanakakunnu Palace, which conducts numerous and watchable cultural events. Padmanabhaswamy Temple located in the city is an architectural wonder besides being embellished in gold platted covering at its sanctum. Trivandrum, being the southernmost district of Kerala possesses its bunch of beaches, shares borders with the neighbouring state and is guarded by the Western Ghats on the other side. So, if wishing to explore its hills, tourists may try to include Ponmudi Hills and Agastyakoodam in their itinerary. Otherwise, the most popular beaches are Shangumukham, Kovalam, Veli and Varkala Beach. Among these, the most popular shores would be those at Kovalam and Varkala. When the former features an adorable lighthouse, there is an iconic rock cliff at the latter. Art lovers are going to great time when dropping over to the Sri Chitra Art Gallery, as it houses the magnificent works of celebrated artist Raja Ravi Varma. 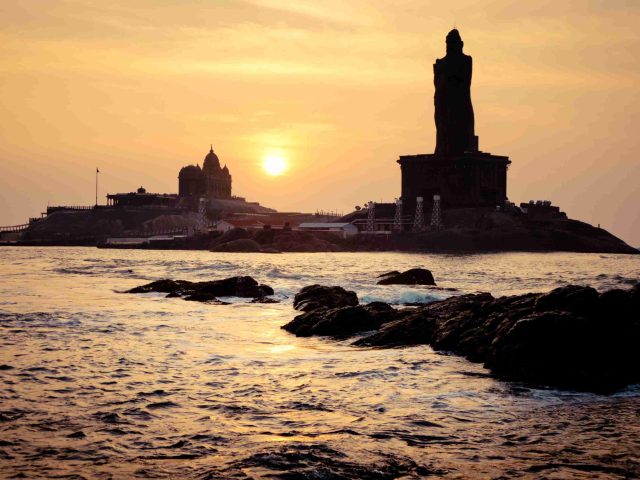 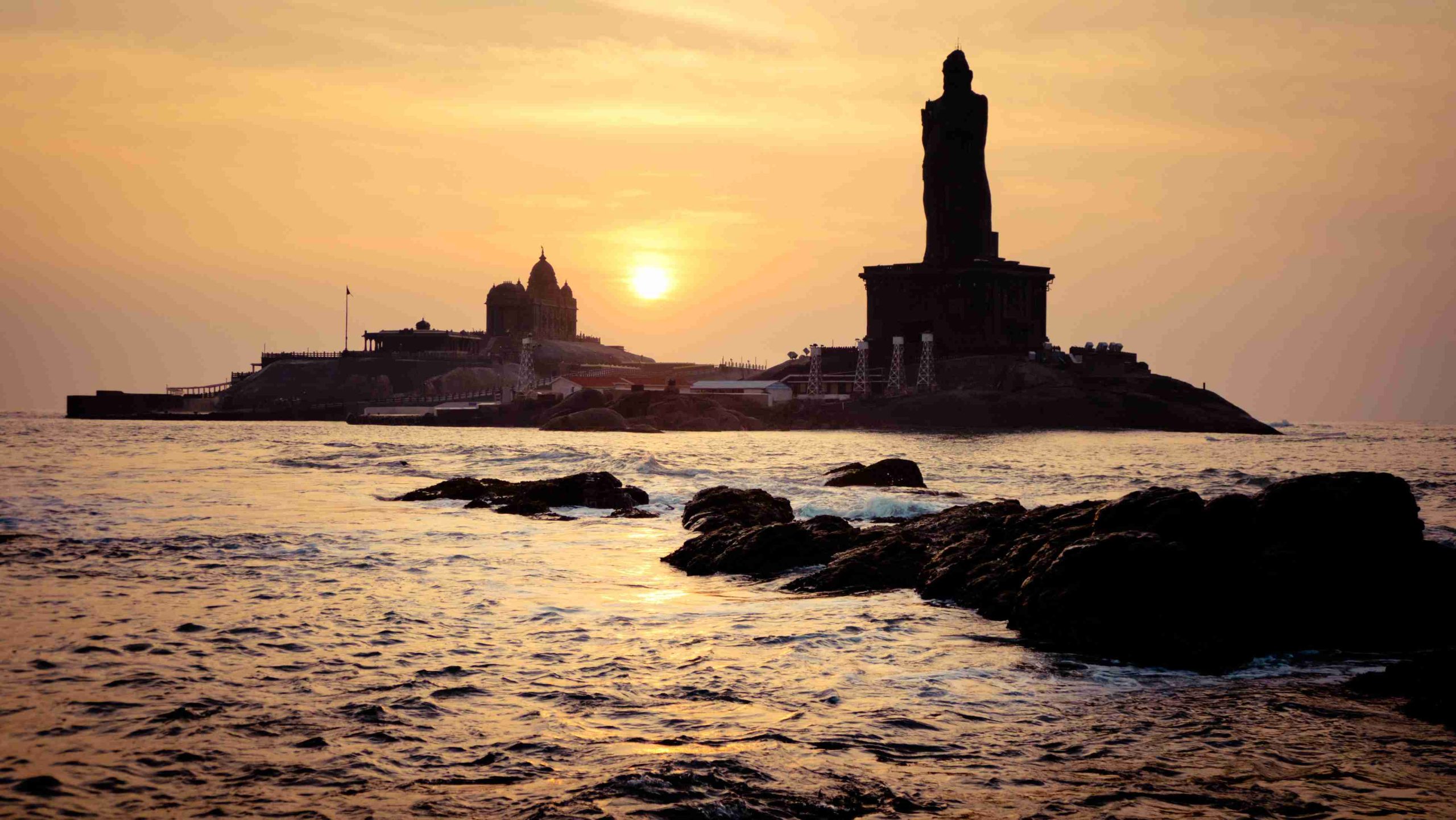 One would already know of the fact that Kanyakumari is the southernmost tip of the Indian mainland. So, when planning for a tour to Kanyakumari, one must expect the beaches. But the travellers would be amazed to glance at the merging of all three of them, namely Bay of Bengal, Arabian Sea and the Indian Ocean meet here. Even otherwise, the wave lashing from all three sides over to the rocks is a splendid sight to be watched at. Therefore, by watching this beautiful, a larger extent of time can be spent. Moreover, they could one of the few beaches of the world where both sunset and sunrise can be watched over much clearly. During a trip to Kerala, one may think of travelling some more distances beyond Trivandrum, because they are availing of that wonderful opportunity to pay a visit to the Vivekananda Rock Memorial. To arrive at that picturesque rock-island one needs to sail off from the main island for around 500 metres. En route to them is situated yet another famous statue of Thiruvalluvar, who was an eminent poet and Philosopher. Tourists may also offer prayers at 3000 years old, Kumari Amman Temple located on the shores of Kanyakumari. It has got a great cultural significance as they are believed to be built by Lord Parasurama. 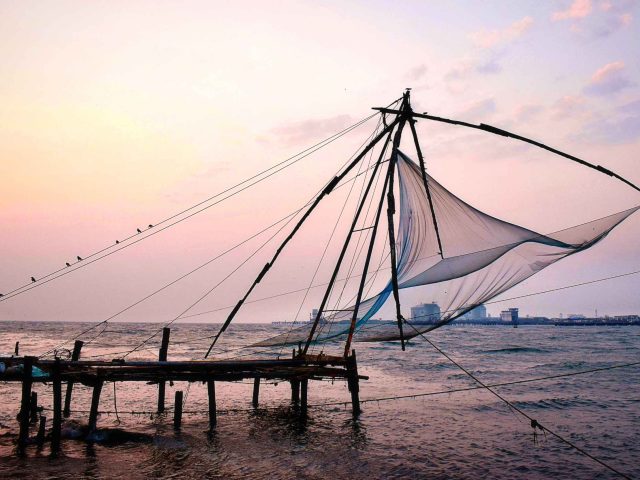 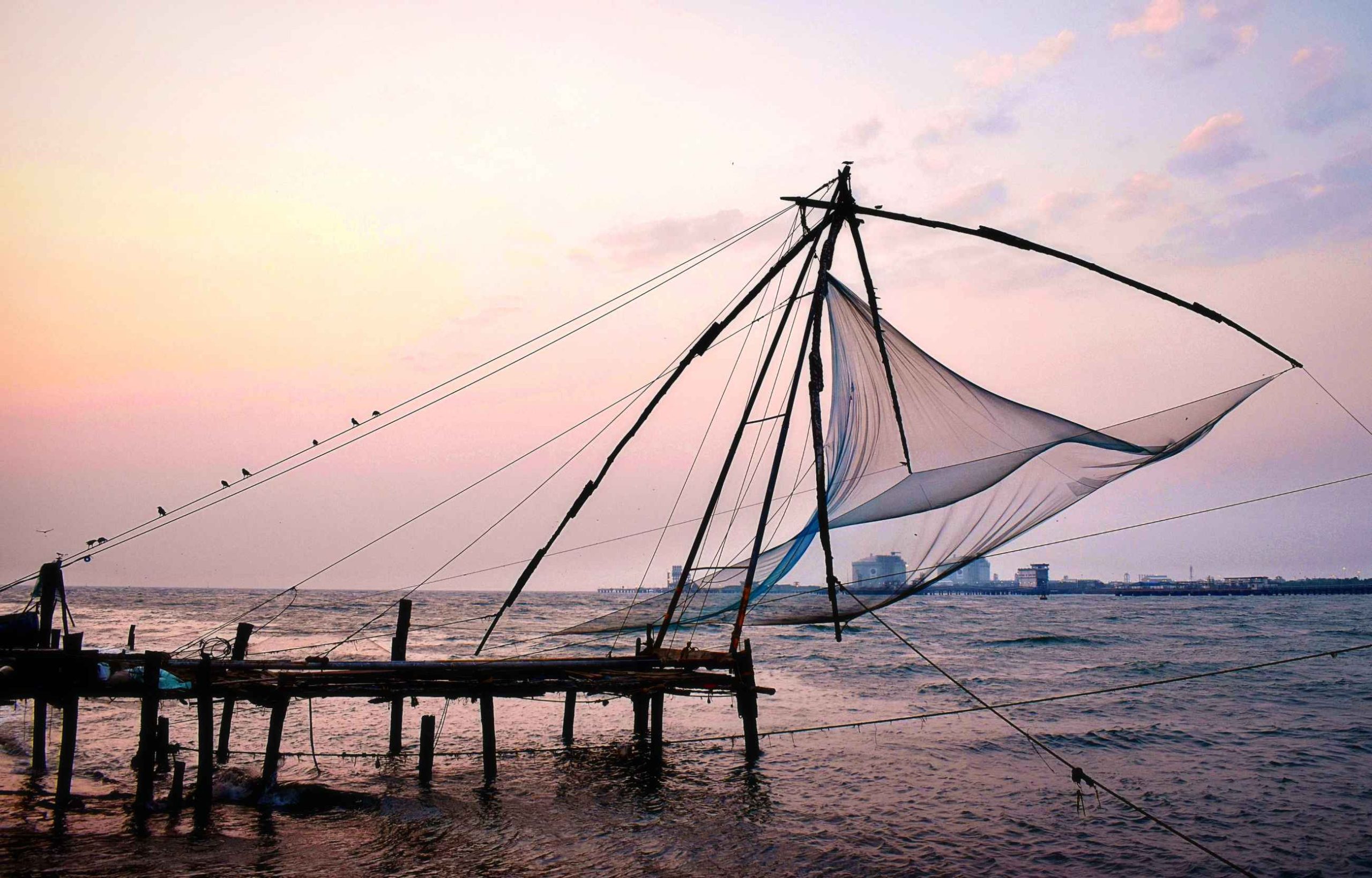 The coastal city is more an exclusive vibe, rather than a tourist destination. The culture that exists here is mixed and diverse. At a single locality, for example, Fort Kochi had been co-existed by Jews, Tamil Brahmins, Jains, Konkanis, Christians and even Buddhists. Most of the travel packages that tourists planning to visit are kick-started at this place. Being known as a significant trade centre ever since the Portuguese had set their foot in Kerala, Cochin is addressed as ‘Queen of Arabian Sea.’ Now, if walking through the colonial streets of Fort Kochi, one could get to see all those historical monuments built mostly by Dutch, then Jews, British and Portuguese. The most attractive examples are St Francis Church, Dutch Palace, Bastion Bungalow, Santa Cruz Basilica, Bolgatty Palace and Jewish Synagogue. Peaceful evenings of Kochi can be spent by Marine Drive walkway by the banks of Vembanad Lake with Chinese fishing nets. Some adorable beaches that are located in Cochin are Kuzhupilly Beach, Cherai Beach and Puthuvype Beach. Furthermore, the palace where the erstwhile Cochin Kingdom had dwelled in Thripunithara, has been converted to Hill Palace Museum. It exhibits old royal ornaments and weapons used by the royals. 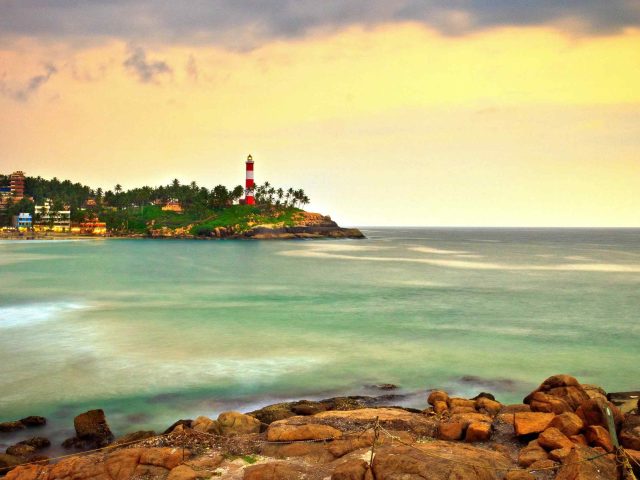 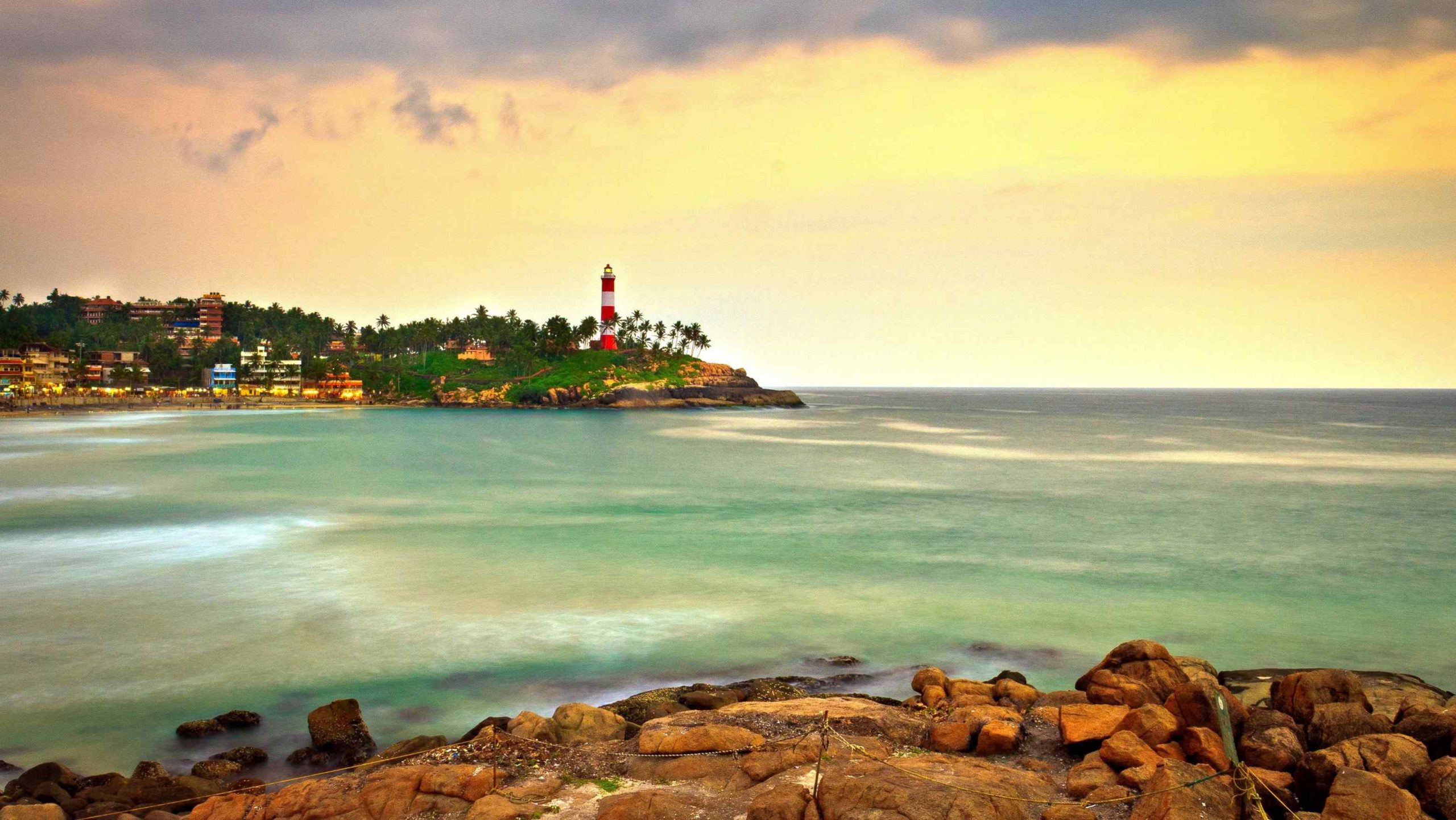 This is an internationally acclaimed beach destination that has everything to satisfy every sort of travellers. Of the various beaches that they possess the most popular one is Lighthouse Beach. It obviously has a 35 meters tall lighthouse painted in white and red colours. They are perched on the top of a hillock, which looks magnificent when photographed. Other popular beaches in the region are Hawa Beach, Samudra Beach, Ashoka Beach and Black Beach. Vacation in Kovalam can be spiced up more by getting engaged in Windsurfing, parasailing, scuba diving or snorkelling. In fact, Kovalam is the sole beach destination that offers such diverse water activities. So never skip that of your Kerala tour. Meanwhile, at Samudra Beach, tourists could get to unwind and watch those lively waves lapping over to its golden shores. One could also get to glance at the local fishermen living their simple and rustic life. Vellayani Lake is a serene lake with freshwater, that flows close to Kovalam. And an enjoyable visit to them will never be regretted. Travellers may explore this hidden treasure amid an enthralling beach vacation at Kovalam. 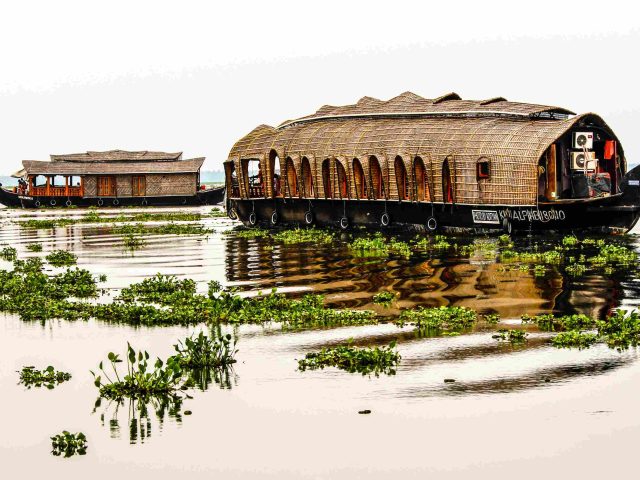 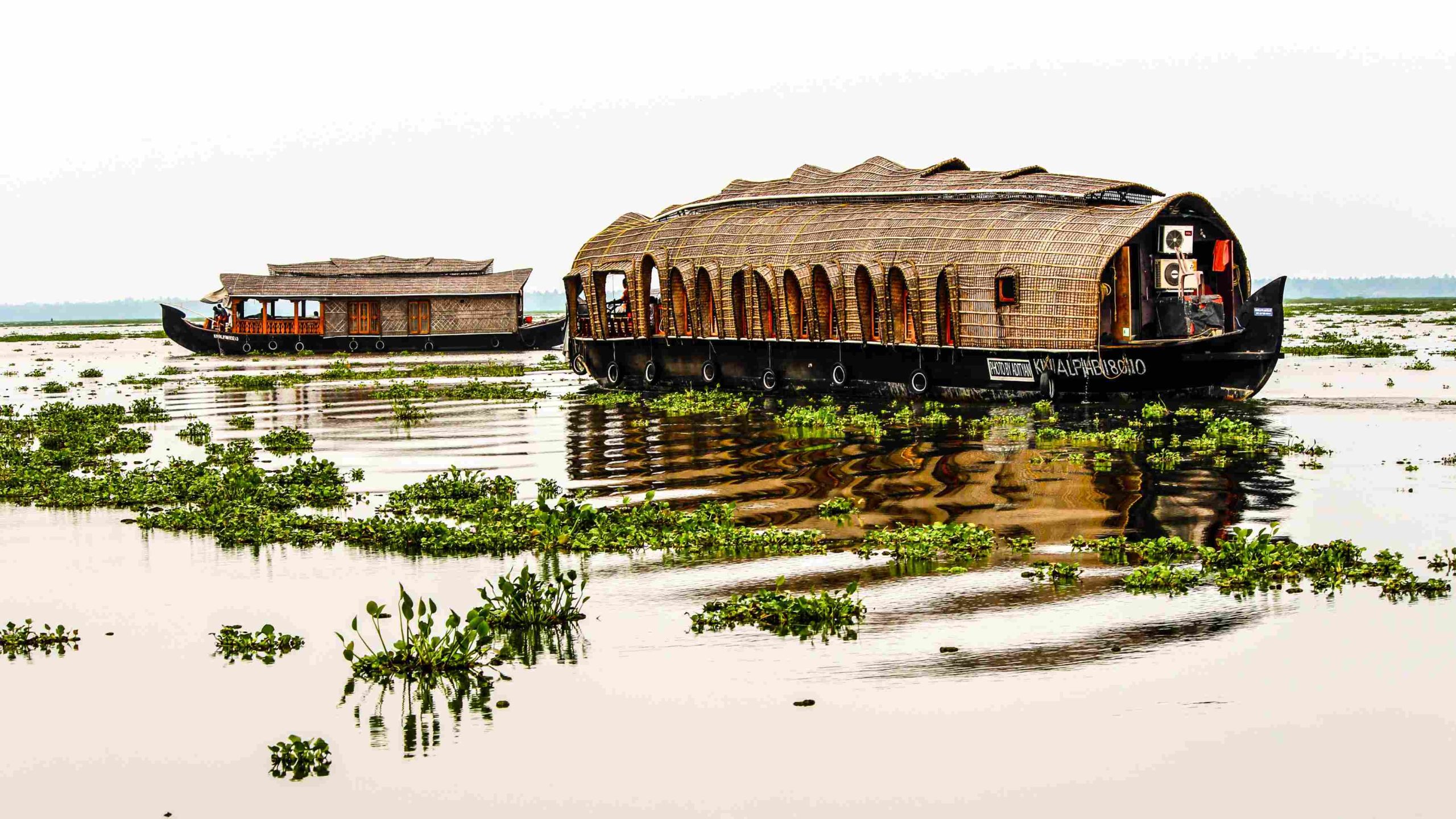 And this is the backwater destination that many of those potential tourists to Kerala had been searching for. They cannot be blamed as the scenic view of the magnificent Kerala houseboat gliding across the serene lakes of Alleppey could enchant anyone. What makes this coastal destination of the state even more charming are the innumerable number of slanting and tall coconut palms standing on its banks. During their trip to Kerala, they may also think of residing an entire night in a houseboat. In that delightful, never miss watching a mesmerising sunset and savours those appetising seafood delicacies. Tourists may also think of visiting its famous Alappuzha Beach which has an old sea pier and hosts various festivals on different occasions. Then there is a more peaceful and alluring shore situated to further northern parts of Alleppey, which is known as Mararikulam Beach. Coir weaving is an interesting thing to be watched and analysed at. It is a crucial means of livelihood to the locals. Moreover, a visit to the alluring region of Kuttanad in Alappuzha is a must-do thing here. The rustic beauty of this backwater destination is truly appealing. Due to the vast expanse of paddy fields and high yields, they are addressed as the ‘rice bowl of Kerala’. 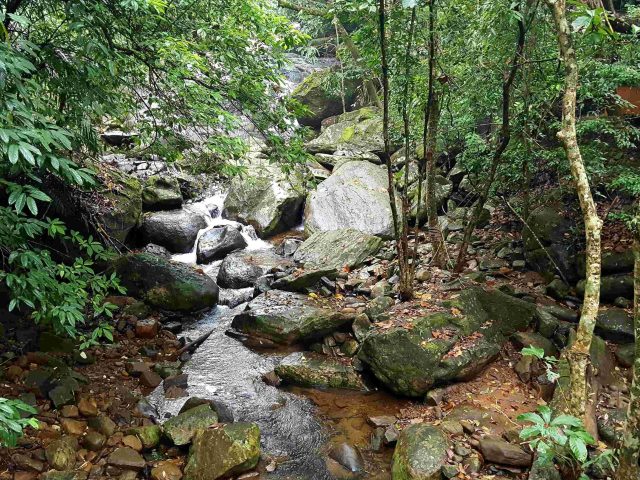 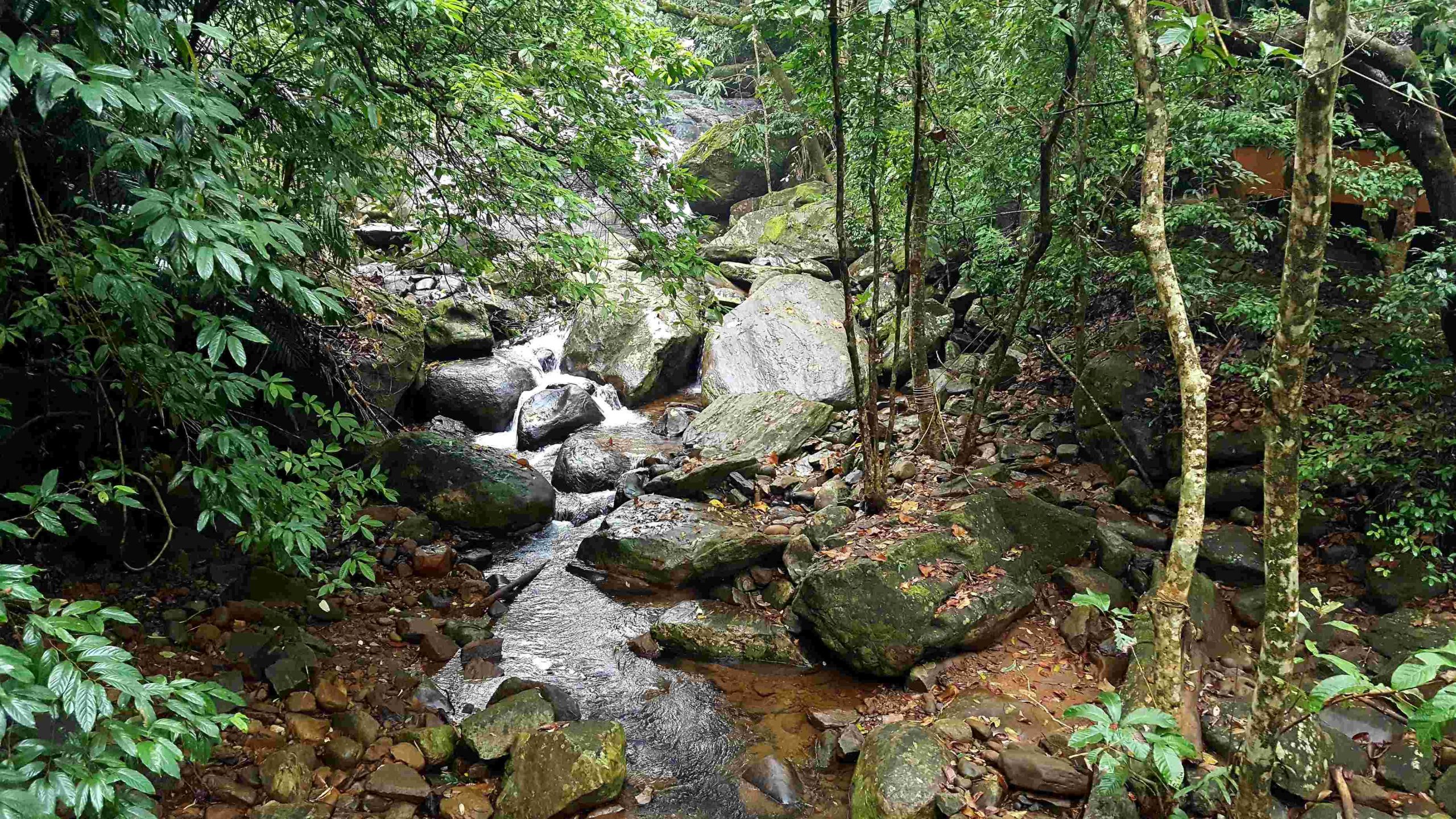 Situated at a height of 2000 m above the mean sea level, Wayanad is yet another gorgeous location in Kerala. It is the only district in Kerala that shares borders with both neighbouring Tamil Nadu and Karnataka. Tourists who are on their Kerala tour could plan to visit Wayanad for their rich flora and fauna, dense forests, mesmerising waterfalls, wildlife sanctuaries, peaks, caves and ancient pilgrimage centres. Kuruva Islands located on the banks of Kabani River, near Manathavady is an exciting spot that can be enjoyed during family trips or honeymoons. They may also try out some bamboo rafting amid its adorable isles. A trek up to Chembra Peak, which is the tallest in Wayanad could bestow the trekker with a mesmerizing sight of the nearby valleys and a heart-shaped pond halfway around the hill. Edakkal Caves in Wayanad is yet another must-visit location, as there are rock inscriptions that are thousands of years old, which very much says about the civilised society that dwelled here long back. A stopover at Pookode Lake, which is one of the freshwater lakes of Kerala, could offer you a lot of experiences. Meenmutty waterfalls and Soochipara waterfalls are a few of the most gorgeous cascading falls in Wayanad. 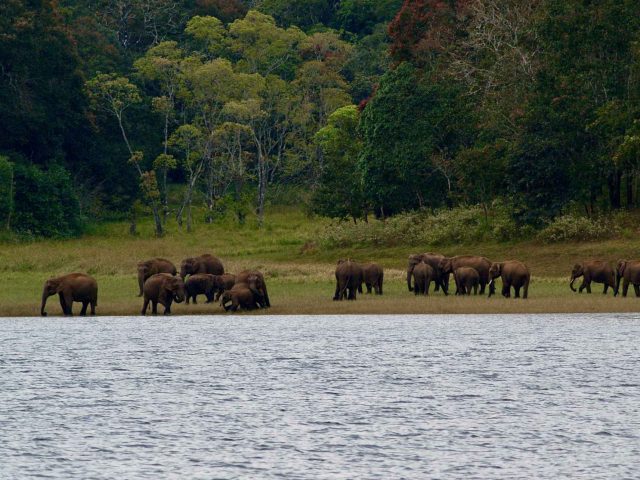 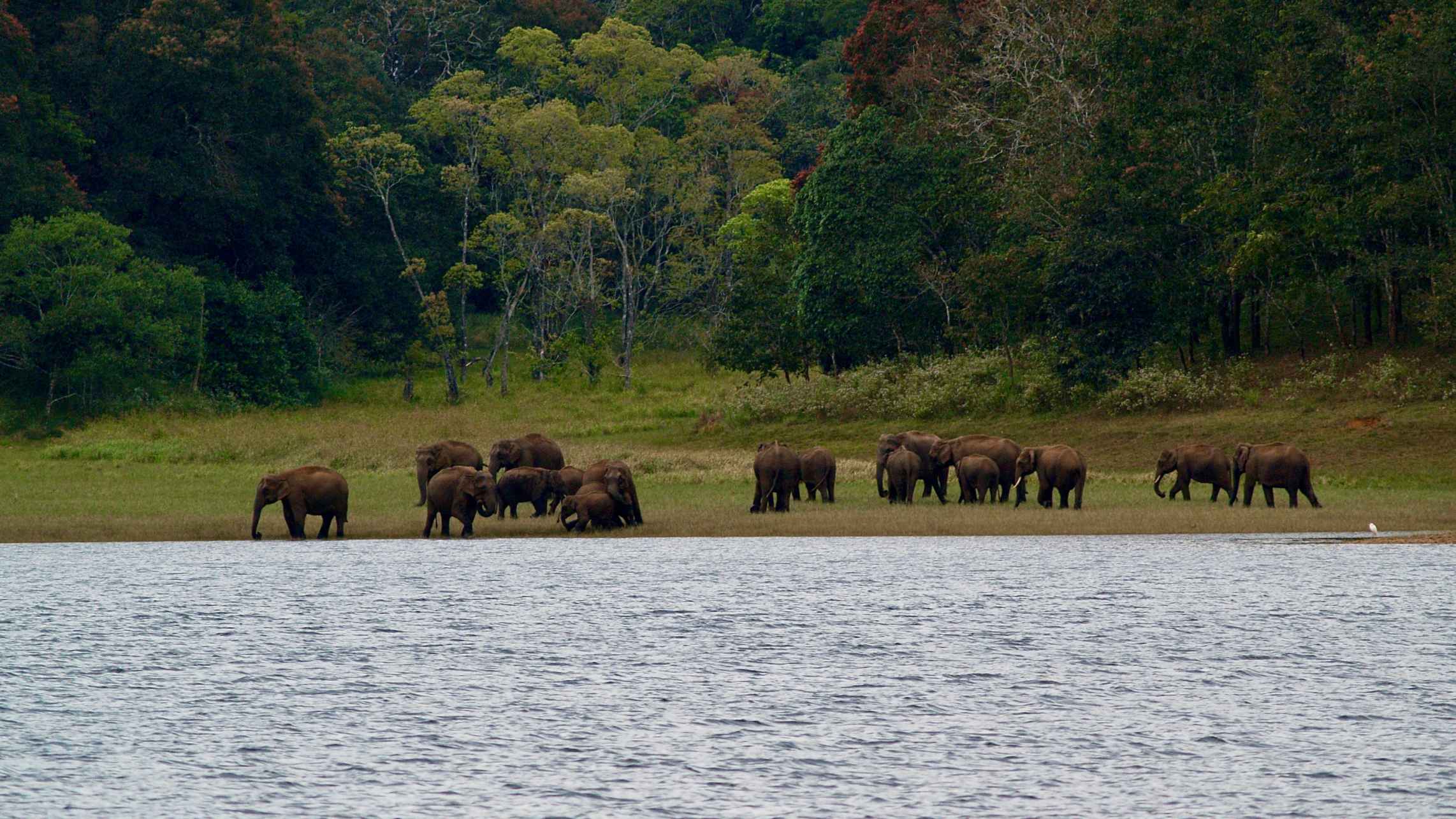 Thekkady is one of those unmissable names in the list of must-visit in Kerela with serene lakes, spice plantations and dense forest that is an abode of flora and fauna. The flowering species spotted here, including endangered ones, sums up to almost 2000. It is more popular for its Periyar Tiger Reserve that is home to Sambhar Deer, Woodpeckers, Flycatchers, Smooth-coated Otter, Malabar Grey Hornbill, Barking Deer, Indian Bison, Wild Dog and White-bellied Treepie, besides tigers. However, more than the tigers, elephants moving as herds will be more visible. More of such beautiful sights can be viewed when trekking or boating through the famous Thekkady Lake. Other than the normal boats, exclusive Bamboo rafts are also made available at the Lake, which can be opted for some more adventure at Thekkady. Tourists also camp at their Bamboo Grove Eco Lodge. Then the entire view of the wildlife sanctuary can be acquired from the watchtower of Periyar. The real beauty of the evergreen deciduous forest can be experienced while residing at the forest cottage of Kokkara that has to be reached after hiking for around an hour through the forest. 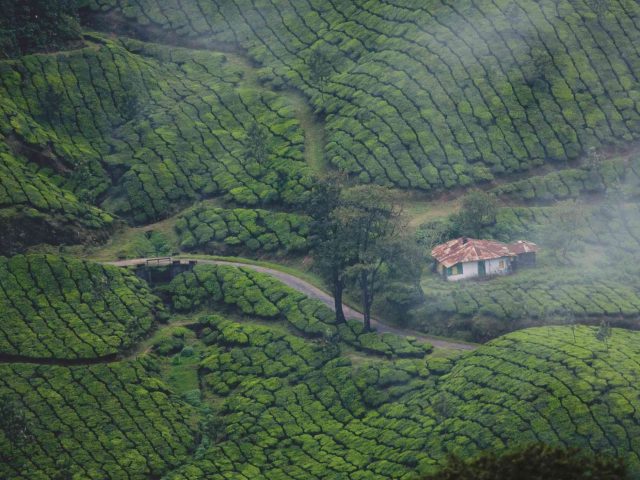 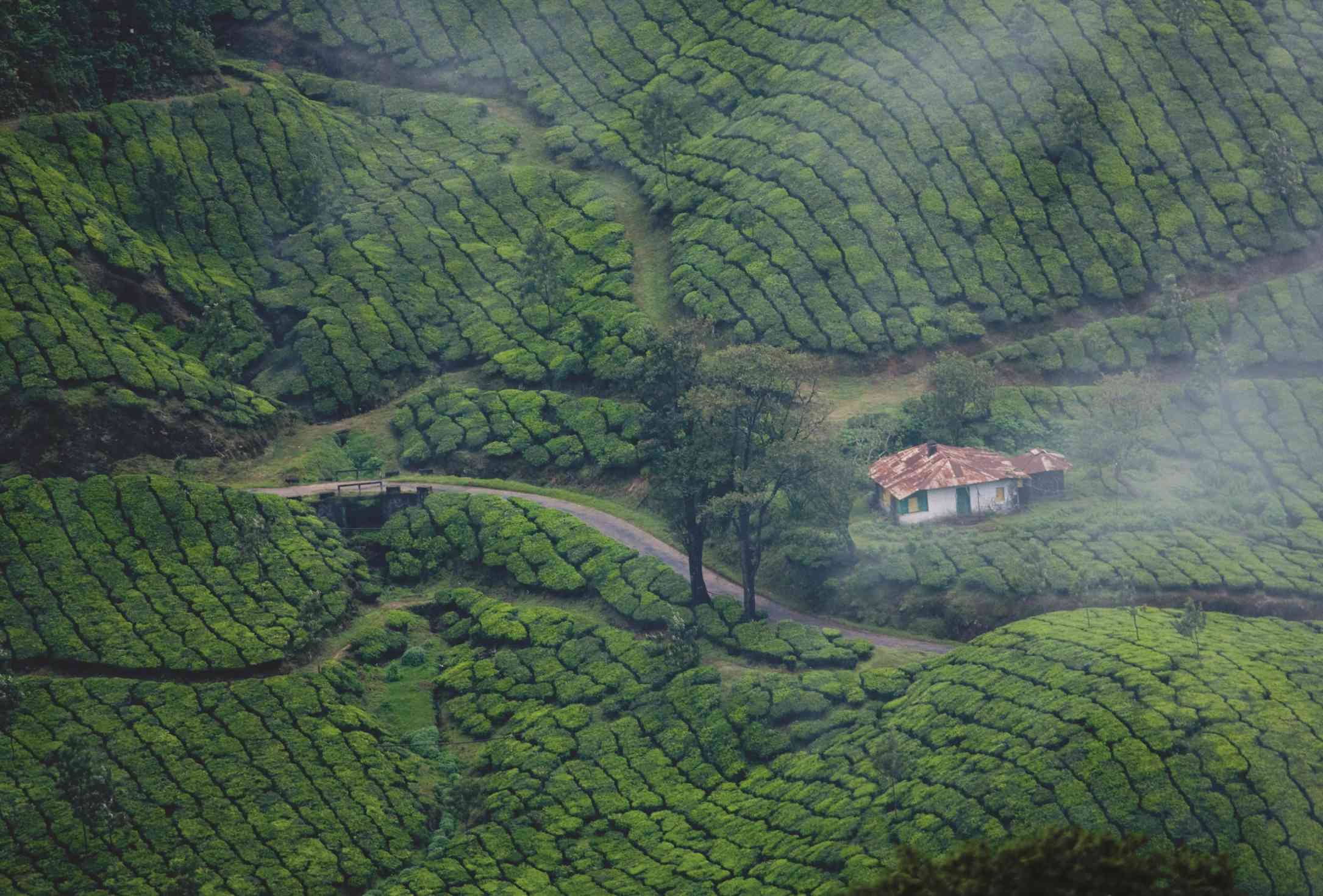 Munnar needs no introduction for the travel enthusiasts, wishing to explore Kerala. The mist-filled hills donned with verdant tea plantations could enchant anyone beholding them. The resort town has got everything to amaze tourists who are on their trip to Kerala. Drop into the ecologically rich Eravikulam National Park and spot those endangered Nilgiri Tahr. It is at this very spot that the spectacular Neelakurinji blooms. En route to Top Station, travellers will get to glance at an enchanting view of the neighbouring Tamil Nadu state. Yet another very accessible tourist spot is Mattupetty Dam. Boating across its serene lake is a favourite thing to do for travellers. The Tea Museum of Munnar exhibits the old pieces of machinery, artefacts and photographs, that has got to narrate the history of tea estates of this region. Other popular tourist spots that can be visited in this particular Kerala tour are Rose Garden, Kundala Lake, Echo Point, Spice Garden and Chithirapuram viewpoint. The highest ever peak of South India, with a whopping height of 2700m is situated within the premises of Eravikulam National Park. Apart from them, various mesmerising waterfalls and viewpoints are located in different parts of this hill station. The best examples are Lakkam waterfalls, Valara waterfalls, Chinnakanal waterfalls and plenty others. The popular sandalwood forest of Marayoor has located barely 40 km from Munnar.